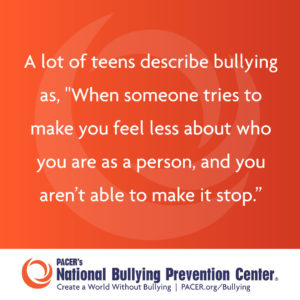 Bullying is more than disagreements, differences of opinion, or conflicts that occur between friends and classmates.

Note: Deﬁnitions vary greatly. This is not a legal deﬁnition. Schools often provide a definition in their bullying prevention policies and procedures. Find your state’s law and deﬁnition at StopBullying.gov

There are three potential roles in a bullying situation:

Who is targeted by bullying?

It’s important to recognize that bullying can happen to ANYONE. Bullying behavior could be directed at the shy, quiet student, or the class tough guy. Research shows that students who are perceived to be different in some way—whether it’s height or weight or the clothes they wear; it might also be because of their disability, race, socioeconomic status, sexual orientation, religion, immigration status, or gender—are at an increased risk of being bullied.

Who does the bullying?

While there are stereotypes about those that bully—scary tough guys with short tempers and intimidating qualities—it’s not appearance that defines who bullies; it’s behavior. Bullying is an action, not a personality trait. Girls bully, boys bully, preschool kids bully, and high school kids bully—there is no single characteristic or personality trait that indicates who bullies others. Students who bully can be any size, age, grade, or gender.

The next question is who witnesses bullying?

Almost all kids see bullying happen at some point. They may not be getting bullied nor the ones doing the bullying, but witnesses are important because their reactions can have a direct impact on the bullying situation. When a group is watching a fight, there might be some who see what’s happening and then walk away; others who continue watching, but say nothing; and then there might be those who cheer on the violence. Each response can affect the outcomes of a bullying situation.

Can someone play more than one role?

Yes! It’s often the case that being bullied, doing the bullying, or witnessing bullying are not distinct categories! It’s more common that kids play multiple roles throughout the day. Someone who was bullied on the bus in the morning might be the one who makes fun of a younger kid that afternoon. The kid who laughed while watching a fight yesterday might ask the new kid with no friends to sit with him at lunch today. The individual who was the target of a vicious rumor on social media might spread gossip about a former friend during lunch the next day. When thinking about who is involved in bullying, it’s important to not strictly label individuals. Calling someone a bully doesn’t factor everything that they may be experiencing. Because bullying is about behavior, roles can be complex and complicated; there often aren’t clear-cut villains or heroes. But that also means we’re all capable of altering that behavior and preventing bullying.

How Is Someone Bullied?

Bullying can take many forms: face to face, whispered comments, notes passed, hurtful things written on bathroom walls, humiliation in front of a group, gossip and rumors, telling stories about someone when they’re unable to defend themselves. All of these instances of bullying can take place in the classroom or hallway, on the bus or in the locker room, while at lunch or playing at recess.

Bullying can also happen through social media, texts, and photos shared via phones, tablets, or computers. When technology is used to bully someone, it’s called cyberbullying. Cyberbullying can be verbal, sexual, or emotional in nature. Specific instances of cyberbullying include sending mean text messages, making fun of someone’s post, sharing videos, stories, or photos that ridicule or humiliate someone, “trolling” someone to the point of harassment, posting personal information about someone else on the internet, and spreading rumors or gossip.

What Are The Types of Bullying

This form of bullying is usually visible, and therefore easy to recognize. Think about the stereotypical movie scenes when someone knocks someone else’s books out of their hands or pushes them up against a locker. Depending on the nature and severity of the contact, anyone who physically bullies usually faces consequences like detention, suspension, or expulsion. Examples of physical bullying include pushing, shoving, hitting, kicking, biting, hair pulling, inappropriate touching, breaking objects, and taking or damaging another’s possessions.

Using words, either out loud or in writing, is a common type of bullying because it’s quick, often done impulsively to elicit a response (and getting a response is typically the goal of bullying). Verbal bullying is also easier to do without catching the attention of adults, making it harder to detect and more difficult to enforce. Examples include teasing, name calling, threats, intimidation, demeaning jokes, rumors, gossip, and slander —all of which can occur both in person or online.

Not everyone thinks of unwanted sexual contact or comments (both in-person or online) as bullying. It’s also often difficult to talk about as it can be very personal and confusing, especially if it’s coming from someone whom you had a relationship with or thought you could trust. It can include using demeaning words about someone’s gender or sexuality, spreading rumors of a sexual nature that harm a person’s reputation, unwanted and inappropriate touching or physical contact, sharing personal information about relationships, or posting inappropriate photos online.

Emotional bullying can be subtle and difficult to detect. It’s calculated and manipulative. It can be perpetuated by a single person, but is most often executed by a group. Emotional bullying can be extremely damaging and traumatic. It’s targeted at a person’s sense of self, causing them to question their self-worth and usually results in low or a complete lack of self-esteem. Emotional bullying, whether it’s done in-person or online, could be excluding someone from a group or purposely leaving them out of activities, threatening to hurt or harm someone, telling lies in order to hurt another person’s reputation, and humiliating someone publicly.

Why Does Bullying Prevention Matter?

This year in the United States, more than one of every five students report being bullied. They are often scared to go to school. That means those students lose the opportunity to learn. It is every student’s right to feel safe – and be safe – in school.

Students who are bullied may also have lower self-esteem, less self-confidence, increased fear and anxiety, depression, lower grades, and even suicidal thoughts.

It’s not just the targets of bullying who affected. Students who bully grow up to have a greater risk of getting in trouble with the law. By the age of 25, one in four who have bullied will have spent time in jail.

Those who witness bullying often express that they feel less safe at school. Their feelings about seeing the bullying range from anger to guilt to fear, and they often wish they could help but don’t know how.

Learn more about the impact of bullying by visiting the “Statistics” and “Facts” pages on PACER’s National Bullying Prevention Center website.

Bullying and Its Impact | PACERTalks About Bullying: Season 2, Episode 11

Do you remember hearing “Sticks and stones may break my bones, but words will never hurt me”? Research has shown that this old saying simply isn’t true. Words can hurt, and bullying can leave a lasting impact. These middle school students share their insights about bullying and its impact.